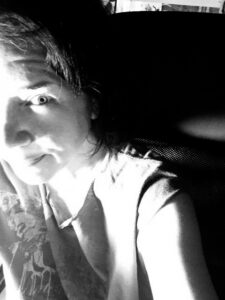 Uncanny Japan is the brainchild of author Thersa Matsuura. Thersa has lived over half her life in Small Town, Japan, first arriving back in 1990 to study at the University of Shizuoka for two years. Her fluency in the language as well as her immersion in the culture allow her to do quite a bit of research for her books and stories. She is especially passionate about strange legends, unfamiliar folktales, curious superstitions, and all those obscure aspects of the culture that aren’t generally known.

As a way to more widely share these fun and fascinating facts, Thersa started the Uncanny Japan Podcast back in 2017, releasing a new episode twice a month.

Another unique aspect about Uncanny Japan is her use of binaural mics to record soundscapes from Japan. Depending on the season, you can listen to the shows and hear a background of winter ocean waves, spring frogs in rice fields, summer festivals, or fall night insects and more. It feels like you’re really sitting in Japan listening to her tell you about all those weird bits of the culture you didn’t know you didn’t know.

But Thersa can’t do it alone. Uncanny Japan would not be possible without sound man extraordinaire and website guru, Rich Pav. Rich is also the audio engineer (and sometimes voice) for Thersa’s other podcast, Soothing Stories, and the Japan Distilled podcast.

As much as possible, music and cool atmospheric and creepy sounds are created by the third member of the team, Julyan Ray Matsuura.

You can support both shows and get some extra content (a monthly recorded Bedtime Story, occasional binaural soundscapes, and the like) over at Patreon for only $5 a month.

Thersa Matsuura is a graduate of Clarion West (2015), recipient of HWA's Mary Wollstonecraft Shelley Scholarship (2015), and the author of another collection, A Robe of Feathers and Other Stories (Counterpoint LLC, 2009). She's also had stories published in various magazines and anthologies including: Black Static, Fortean Times, Madhouse, and The Beauty of Death Anthology. Her newest collection -- The Carp-Faced Boy and Other Stories (Independent Legions Publishing) was a finalist for The Bram Stoker Award (2017).