Contents
1 What is an Omamori?
2 What is an Ofuda?
3 The Story of Tsuno Daishi
4 Credits
5 4 comments on “Tsuno Daishi: The Great Horned Master (Ep. 43)”
6 Related Posts

When walking around Japan you might see a small rectangular piece of paper pasted near a front door or on a gate. On this paper is an image that can only be described as a demon or devil. While off-putting at first, this creepy little fellow isn’t actually a bad guy; he’s there to protect the family and household. On this episode of Uncanny Japan, I’m going to tell you why. 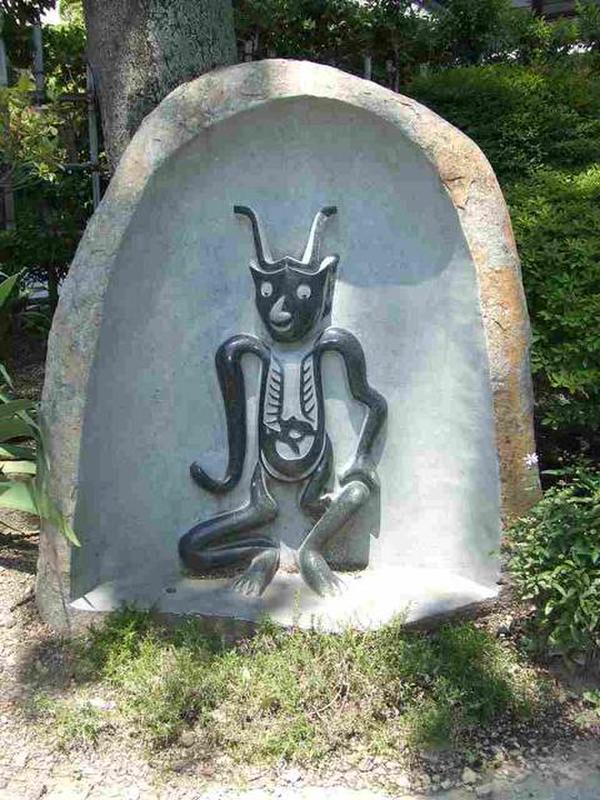 Hey, hey everyone. How are you all doing? I’m nursing a slight cold so my voice might be a little wonky. But I wanted to go ahead and record this and get it up because my plan is to get two episodes out in November.

It’s been a while since I’ve been to the ocean. So here I am. They’re mellow waves but I’m going to put just the binaurally-miked version of them up on my Patreon page for those who have trouble sleeping like me or just want to close their eyes and imagine sitting by a rocky Japanese shore.

Okay, on to today’s show. Today I’m going to tell you about Tsuno Daishi or the Great Horned Master. But before we get to him, let me explain what omamori and ofuda are.

What is an Omamori?

Mamoru is the verb to protect. So an omamori is a small amulet, often made from colorful brocaded silk with a string so you can tie it to things. Its purpose is to protect you or to help you in some area of your life. If you’ve been to Japan, I’m sure you’ve seen them. They’re sold in temples and shrines all over. They only cost a few hundred yen and are basically good luck charms that have specific uses. There are omamori to help you study, to keep you safe while driving, to help you become pregnant and then have a healthy baby, as well as ones to find the perfect lover or to come into a lot of money. You can see them dangling from people’s purses, backpacks, rear-view mirrors, or maybe even tucked inside a pencil case. So an omamori is a small, pretty, portable good luck charm.

There is also something called an ofuda. It too is a kind of talisman to ward off evil. But instead of being carried around, it’s hung or pasted somewhere, usually a house, front gate, or a store. They can be made of wood, cloth, or metal, but I think the kind I see most often are paper strips with fancy characters on them and stamped with red vermillion hanko.

If you visit a temple or a shrine in Japan, pay attention to the front gate, the pillars, and the ceilings. Sometimes you can see old ofuda plastered willy-nilly all over the place. I think they’re super cool, and they’re believed to prevent evil spirits from entering one’s abode.

You’ll also find ofuda mentioned in all kinds of Japanese tales. For example, I just wrote an article for Sotheby’s about the great three Japanese ghosts. And one of the stories, called Botan Dōrō, is about Otsuyu. I don’t want to give away too much, but at one point an ofuda is used to keep the ghost out of our protagonist’s house.

The Story of Tsuno Daishi

The first time I came across the Great Horned Master, or the Tsuno Daishi, was about 15 years ago, when I visited a tiny mountain village in my town called Hanazawa no Sato. It’s this quiet neighborhood with 100-year-old homes, narrow roads, mossy stone walls, and trickling streams. As I walked along and admired the architecture, I noticed that almost every house had a very disturbing ofuda pasted on their doors or on their wooden gates. To me, it looked like a demon. The more I walked, the more unsettled I became. Was it some strange religious cult? Let me try to describe what I saw.

Okay, imagine an ofuda, a rectangular piece of white paper, I don’t know, about 20 centimeters or 8 inches long by 10 centimeters or 4 inches wide. On it is printed a simple black image. It’s a figure kind of sitting or crouching down on its haunches. There are thin, boneless-looking wavy arms and legs. A body that is black, except for what looks like cut out white parts that could represent ribs and a couple internal organs, the stomach and kidneys, maybe. The creature has round buggy eyes, a big nose, and horns, or could they be antlers?

Recently, a Japanese friend said that from a distance, it looks like a character from Sanskrit, and she’s spot on. It’s got that vibe. I mean, the Tsuno Daishi is very old, and I suppose there is a possibility that he traveled all the way from India. But here are the stories I’ve read about the origins of this creepy little guy.

Once upon a time, there was a monk named Ryōgen. He was born in 912 and became the 18th abbot of the Enryaku Temple in the year 966. He spent the next 19 years rebuilding the temple complex and upping the image of the Tendai sect of Buddhism. One day, I’ll touch upon some of the different types of Buddhism in Japan. But for now, just know that Tendai is not Zen. It, along with the Shingon sect, is an esoteric or Mikkyō school. Think tantra, wonderful rituals that involve gorgeous Indian objects, and lots and lots of fire. OK, back to Ryōgen. At one point, the emperor Enyu was very ill, and Ryōgen prayed for his health. The emperor then did indeed recover, and Ryōgen was granted the title Daishi, or great master.

There are a couple versions of how he became associated with the horned devil-looking fellow I saw on the houses. The first one just says that he gained the curious supernatural ability of being able to transform his body into that of a demon.

One day, when the town was hit by a deadly epidemic, and people were dying left and right, Ryōgen turned himself into this horned creature and frightened the plague god, or Yakubyougami, away.

A second story that I’ve heard from people in Japan but have not found written in English anywhere is an elaboration on the story above. Again, it starts with a horrible epidemic plaguing the city, and Ryōgen, in order to try to save the people, decides to sit in front of a full-length mirror and meditate. While meditating, one of his followers sketched a picture of what he saw in the mirror. Slowly, the reflection of the stoic abbot Ryōgen changed. The flesh fell away, and he was revealed as a hideous demon or oni. The follower later copied this image by carving a woodblock print and making a fuda for people to put outside their homes to keep away illness.

Ryōgen is believed to have said something about, the best way to fight off a scary demon is to become a scarier demon. So the image of the Tsuno Daishi is one that can ward off evil and illness.

A real quick note about names, while the abbot was called Ryōgen Daishi while alive, he acquired quite a few monikers after his death. The first one being his posthumous name. When people die in Japan, even now, they are given a new name for the afterlife. Ryōgen was given Jie, so Jie Daishi was one of his names.

But then there are cooler names like Tsuno Daishi, the great horned master, and Ganzan Daishi, the third day of the first month master, because that was the day he died.

You’ll also find him sometimes referred to as the Mayoke Daishi or Gooma Daishi, great master of warding off evil. I’ve seen one English translation that calls him simply the demon king, and I kind of like that too.

Another interesting thing I’ve read is that there are 18 icons of Tsuno Daishi, and all of them are enshrined in different temples scattered throughout Kyoto. On January 3rd, the day he died, a small group of devoted followers attempts to pay a visit to each and every one of these 18 temples.

Oh, and here’s a cute legend about him. There was a statue of Tsuno Daishi in a temple called Jindai-ji. During the Muromachi era, there was a great fire that destroyed the temple. Only later it was learned that the statue had survived because it flew and hid inside a nearby pond.

So when in Japan, keep a lookout for the creepy little demon king on fuda high up on a front door or gate, and tell your friend who you’re traveling with that he’s not a bad guy. He’s actually a good guy, keeping someone safe from evil and the plague.

After that first experience, I started seeing him everywhere, tucked under eaves or faded on the tall wooden front gate of a house. Then one day I was visiting a temple deep in the mountains, and I saw that they sold the ofudas. Not big ones like I described, but small, business card-sized ones. Gold and green laminated paper. So I bought one. It’s meant to be kept in your wallet, a kind of omamori-fuda hybrid maybe? I’ll put some images on the Uncanny Japan website so you can see what he looks like.

And I found a really cute version of the Tsuno Daishi that I’m going to use for postcards this month for my patrons. And speaking of patrons, I want to extra especially thank all of you. Life is quite tumultuous right now, and if it weren’t for you all, I’m not sure what would happen to this show. So thank you so much.

And be sure to go to the Patreon page so you can get some binaurally-miked ocean waves this month. And on top of that, I wanted to mention here that I also got some more stickers, round ones that have the ojizo oni logo from the podcast, the one with the red background. They’re quite stunning, and if you’re a patron and you want one, please let me know, and I can get that out to you while supplies last.

Thank you all so much for listening, supporting, reviewing. I had some really good reviews this past week. Messaging, emailing, and spreading the word about Uncanny Japan. I will talk to you all again real soon. 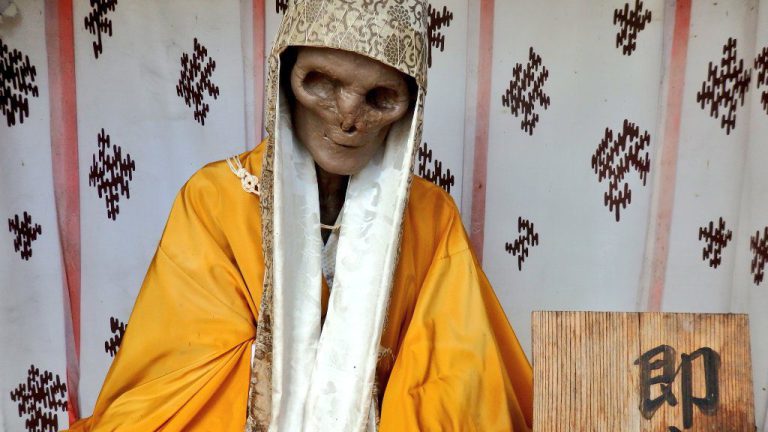 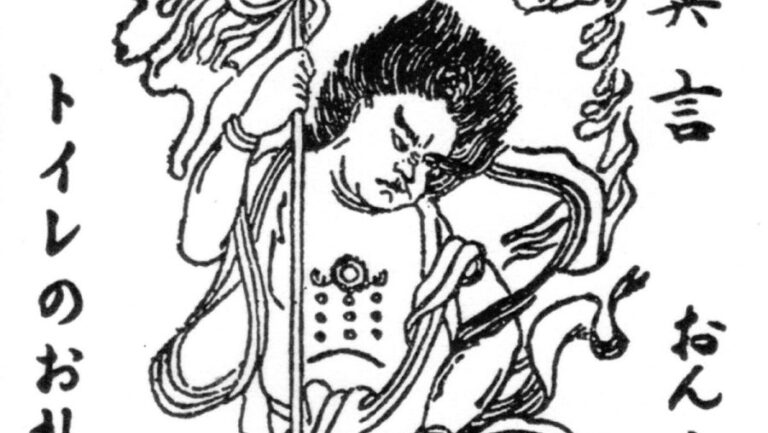 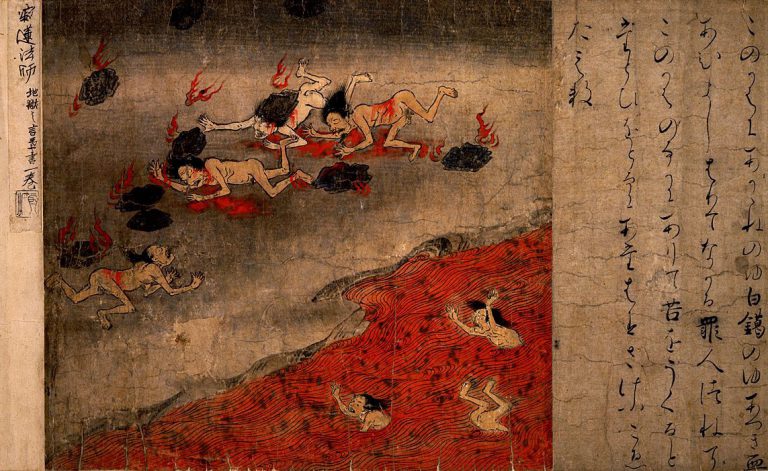