Story Time is a little bit different than the usual Uncanny Japan podcast. Instead of me telling you about some interesting, odd, or spooky tidbit, I’ll be reading you a story. This is something I do over on Patreon once a month. There I call them Bedtime Stories and they’re more varied, from obscure pieces of folklore I find, translate, and slightly reimagine (for the story’s sake), to pieces I discover in the public domain and sometimes even my own work. But that’s that.

Here on Uncanny Japan, I’ve decided to also occasionally visit story telling. The folktales will be different than the ones on Patreon and I’m going to start with some of Lafcadio Hearn’s wonderful pieces that are up on Gutenberg.

Another thing, on the regular Uncanny Japan podcasts I use my binaural mics to record ambient sounds from my little part of Japan. However, with the Story Time episodes I’ll be using a music bed provide by my musician son, who also does the intro/outro music. Julyan Ray Matsuura. Here and here. And here.

EIGHT centuries ago, the priests of Mugenyama, in the province of Tōtōmi, wanted a big bell for their temple; and they asked the women of their parish to help them by contributing old bronze mirrors for bell-metal.

There was at that time a young woman, a farmer’s wife, living at Mugenyama, who presented her mirror to the temple, to be used for bell-metal. But afterwards she much regretted her mirror. She remembered things that her mother had told her about it; and she remembered that it had belonged, not only to her mother but to her mother’s mother and grandmother; and she remembered some happy smiles which it had reflected. Of course, if she could have offered the priests a certain sum of money in place of the mirror, she could have asked them to give back her heirloom. But she had not the money necessary. Whenever she went to the temple, she saw her mirror lying in the court-yard, behind a railing, among hundreds of other mirrors heaped there together. She knew it by the Shō-Chiku-Bai in relief on the back of it, – those three fortunate emblems of Pine, Bamboo, and Plumflower, which delighted her baby-eyes when her mother first showed her the mirror. She longed for some chance to steal the mirror, and hide it, – that she might thereafter treasure it always. But the chance did not come; and she became very unhappy, – felt as if she had foolishly given away a part of her life. She thought about the old saying that a mirror is the Soul of a Woman– (a saying mystically expressed, by the Chinese character for Soul, upon the backs of many bronze mirrors), – and she feared that it was true in weirder ways than she had before imagined. But she could not dare to speak of her pain to anybody.

Now, when all the mirrors contributed for the Mugenyama bell had been sent to the foundry, the bell-founders discovered that there was one mirror among them which would not melt. Again and again they tried to melt it; but it resisted all their efforts. Evidently the woman who had given that mirror to the temple must have regretted the giving. She had not presented her offering with all her heart; and therefore her selfish soul, remaining attached to the mirror, kept it hard and cold in the midst of the furnace.
Of course everybody heard of the matter, and everybody soon knew whose mirror it was that would not melt. And because of this public exposure of her secret fault, the poor woman became very much ashamed and very angry. And as she could not bear the shame, she drowned herself, after having written a farewell letter containing these words:–

“When I am dead, it will not be difficult to melt the mirror and to cast the bell. But, to the person who breaks that bell by ringing it, great wealth will be given by the ghost of me.”

– You must know that the last wish or promise of anybody who dies in anger, or performs suicide in anger, is generally supposed to possess a supernatural force. After the dead woman’s mirror had been melted, and the bell had been successfully cast, people remembered the words of that letter. They felt sure that the spirit of the writer would give wealth to the breaker of the bell; and, as soon as the bell had been suspended in the court of the temple, they went in multitude to ring it. With all their might and main they swung the ringing-beam; but the bell proved to be a good bell, and it bravely withstood their assaults. Nevertheless, the people were not easily discouraged. Day after day, at all hours, they continued to ring the bell furiously, – caring nothing whatever for the protests of the priests. So the ringing became an affliction; and the priests could not endure it; and they got rid of the bell by rolling it down the hill into a swamp. The swamp was deep, and swallowed it up, – and that was the end of the bell. Only its legend remains; and in that legend it is called the Mugen-Kané, or Bell of Mugen.

Now there are queer old Japanese beliefs in the magical efficacy of a certain mental operation implied, though not described, by the verb nazoraëru. The word itself cannot be adequately rendered by any English word; for it is used in relation to many kinds of mimetic magic, as well as in relation to the performance of many religious acts of faith. Common meanings of nazoraëru, according to dictionaries, are “to imitate,” “to compare,” “to liken;” but the esoteric meaning is to substitute, in imagination, one object or action for another, so as to bring about some magical or miraculous result.
For example:– you cannot afford to build a Buddhist temple; but you can easily lay a pebble before the image of the Buddha, with the same pious feeling that would prompt you to build a temple if you were rich enough to build one. The merit of so offering the pebble becomes equal, or almost equal, to the merit of erecting a temple…. You cannot read the six thousand seven hundred and seventy-one volumes of the Buddhist texts; but you can make a revolving library, containing them, turn round, by pushing it like a windlass. And if you push with an earnest wish that you could read the six thousand seven hundred and seventy-one volumes, you will acquire the same merit as the reading of them would enable you to gain…. So much will perhaps suffice to explain the religious meanings of nazoraëru.
The magical meanings could not all be explained without a great variety of examples; but, for present purposes, the following will serve. If you should make a little man of straw, for the same reason that Sister Helen made a little man of wax, – and nail it, with nails not less than five inches long, to some tree in a temple-grove at the Hour of the Ox, – and if the person, imaginatively represented by that little straw man, should die thereafter in atrocious agony, – that would illustrate one signification of nazoraëru…. Or, let us suppose that a robber has entered your house during the night, and carried away your valuables. If you can discover the footprints of that robber in your garden, and then promptly burn a very large moxa on each of them, the soles of the feet of the robber will become inflamed, and will allow him no rest until he returns, of his own accord, to put himself at your mercy. That is another kind of mimetic magic expressed by the term nazoraëru. And a third kind is illustrated by various legends of the Mugen-Kané.

After the bell had been rolled into the swamp, there was, of course, no more chance of ringing it in such wise as to break it. But persons who regretted this loss of opportunity would strike and break objects imaginatively substituted for the bell, – thus hoping to please the spirit of the owner of the mirror that had made so much trouble. One of these persons was a woman called Umégaë, – famed in Japanese legend because of her relation to Kajiwara Kagésué, a warrior of the Heiké clan. While the pair were traveling together, Kajiwara one day found himself in great straits for want of money; and Umégaë, remembering the tradition of the Bell of Mugen, took a basin of bronze, and, mentally representing it to be the bell, beat upon it until she broke it, – crying out, at the same time, for three hundred pieces of gold. A guest of the inn where the pair were stopping made inquiry as to the cause of the banging and the crying, and, on learning the story of the trouble, actually presented Umégaë with three hundred ryō in gold. Afterwards a song was made about Umégaë’s basin of bronze; and that song is sung by dancing girls even to this day:–

After this happening, the fame of the Mugen-Kané became great; and many people followed the example of Umégaë, – thereby hoping to emulate her luck. Among these folk was a dissolute farmer who lived near Mugenyama, on the bank of the ōïgawa. Having wasted his substance in riotous living, this farmer made for himself, out of the mud in his garden, a clay-model of the Mugen-Kané; and he beat the clay-bell, and broke it, – crying out the while for great wealth.
Then, out of the ground before him, rose up the figure of a white-robed woman, with long loose-flowing hair, holding a covered jar. And the woman said: “I have come to answer your fervent prayer as it deserves to be answered. Take, therefore, this jar.” So saying, she put the jar into his hands, and disappeared.
Into his house the happy man rushed, to tell his wife the good news. He set down in front of her the covered jar, – which was heavy, – and they opened it together. And they found that it was filled, up to the very brim, with…
But, no!– I really cannot tell you with what it was filled. 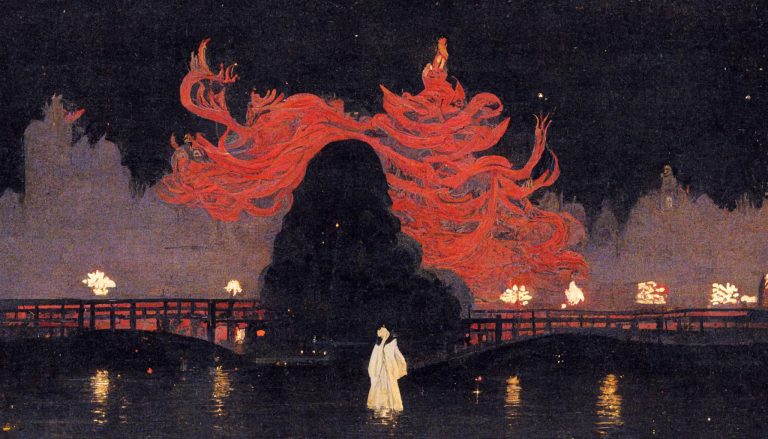 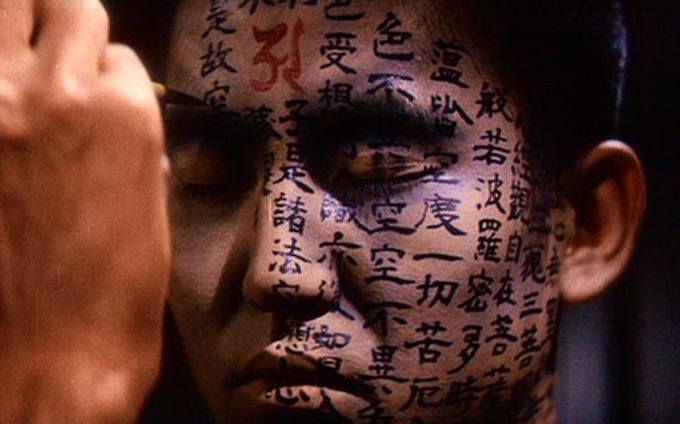 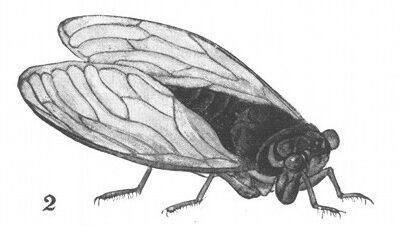 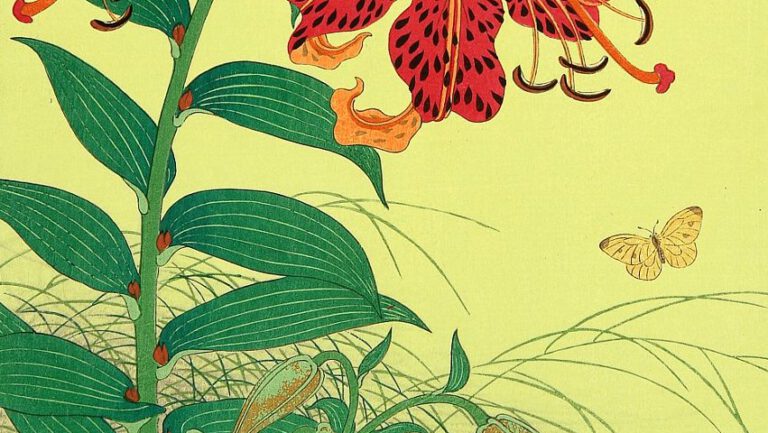 Story Time: “The Dream of Akinosuke” by Lafcadio Hearn (Ep. 64)