Contents
1 What is an Baku?
2 The Baku in History
3 The Baku in Popular Culture
4 Credits
5 One comment on “Baku: The Eater of Dreams (Ep. 65)”
6 Related Posts

The baku (獏) is a Japanese mythical creature that, when invited, slips into your room at night to gobble up your nightmares.

Below is an example of the Takarabune (宝船) image with the old character for baku (獏) on the sail. Tuck this under your pillow on New Year’s Eve for some extra lucky dreams. 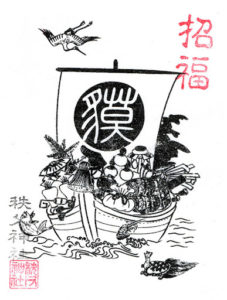 Have you ever had this happen to you?

You bolt awake, your chest tight, and you’re panting, terrified. You’ve just had the most awful nightmare. You look around the room. There’s a dim light, either from your cell phone charger, a soft night light, or the flickering glow of an oil lamp behind thick washi paper.

It’s enough for you see by, at least a little bit. After checking all the corners of your room, the foot of your bed, and that half open closet and finding no one there, you relax just a little. Take a few deep breaths. Tell yourself, it was just a nightmare. Not real. But it’s a nightmare you’ve had before. Several times in fact. You wish you’d stop having it.

Just then there is a noise. The sound of your window sliding open.  You pull the covers up to your chin and watch horrified as the most freaky looking creature you’ve ever seen climbs into your room.

Believe it or not, today’s show isn’t a scary one.  It’s a sweet one. An endearing one. A downright cute one, if you will.

On today’s Uncanny Japan I’m going to tell you about a Japanese mythical creature, often said to be a youkai, although I’ve seen some debate about that. It’s called a baku. And it’s really here to help you. I promise.

What is an Baku?

So what exactly is that creature making its way across the floor toward you? Let’s take a closer look.

That creature is called a baku and has a long nose like an elephant, four feet that look like they belong on a tiger. It’s  body resembles a bear. Its eyes? That of a rhino. It sports two tusks, and on its backend flicks the tail of an ox.

But keep in mind there are several different varieties.

Why such a patchwork beast? Well, one explanation is that when the gods were done creating all the animals, they looked around, gathered up all the scraps and cobbled together the baku.

Which is a legendary creature that made its way from China to Japan at about the same time as Buddhism did. The China version is a little different, actually protecting a person from pestilence and evil, while once in Japan the baku’s soul purpose seems to be to eat your dreams, or better, your nightmares. It needs them to survive.

It’s said that back in the day, children who woke from a nightmare would know to repeat three times, “Baku-san, come eat my dream.” I’ve seen a couple different versions in Japanese, one being “Kono yume, baku ni agemasu.” Literally, “I give this dream to the baku.”

Either way, after repeating three times one of these lines, or something similar, the baku will enter the room, make its way over, and gobble up the bad dream. The dreamer will never have that particular nightmare again.

So that’s what a bizarre looking baku does. It spends the night hoping from rooftop to rooftop, listening for someone to yell out, so it can hurry over and feast on their bad dreams.

I read in a couple places that you have to be careful. If you call a baku too often it will get greedy and won’t stop at your nightmares. It will proceed to devour all your hopes and dreams and aspirations, leaving you with an entirely meaningless life.

But I couldn’t find that exact sentiment written in Japanese. There’s no way I can read everything about this adorable little guy, so maybe I missed it. There was one thing I did find, though, and that is that, sadly, in recent times, some stories about the baku have flipped the mythology.

Instead of eating only your nightmares, it does eat all your dreams. And I guess this could include your hopes and goals, which turns this adorable little weird beastie into a bad guy. But he isn’t, no matter how bizarre he looks and how he might be sneaking into your window late at night.

Speaking of that, this month on Patreon I read a Lafcadio Hearn story about the baku. And in it, the baku after being called, actually refuses to eat a lucky dream.

Here’s something interesting: If you live in Japan or are planning to visit, you can sometimes still see depictions of the baku at old shrines or temples. Look up. You know how in the corners of those fancy curved roofs where you can sometimes find carvings of lucky mythical creatures, well, at some temples they’ll also have a baku or two looking down at you. Easily identifiable by that long nose.

The Baku in History

Okay, let’s look at the baku through the ages.

In the  late Muromachi Period (around the 1500s) both the image and the character of the baku were used as good luck charms. For example, — and this is something you can try next month, if you’d like, — if you want your first dreams in the New Year to be pleasant and auspicious you can get or make a drawing of a takarabune or treasure boat, that’s the boat the seven lucky gods sail on and slip it under your pillow. To further up your sweet dreams potential, you should write the character for baku on the sail of the boat.

Okay, back to the Muromachi Era, I also read that people who were on their deathbeds would be given an image of the baku to hold as protection against evil spirits.

More recently, in the Edo era, I found that some people used baku-shaped pillows to fend off bad dreams. And by pillows, I’m not talking about the soft, down-filled things we use today. Pillows back then were made of wood or ceramic with a small cloth tube filled with something like soba husks tied to the top.

It’s said that even in the 1910s, Japanese children kept baku talisman by their bedsides.

When researching the baku you discover right away that the word baku and the kanji also refer to the Asian tapir, an animal that is also a little funky looking with its long nose and stripped body.

I found two lines of thought. One that the mythical baku came first, then when the tapir was seen, because it resembled the dream eater, it was given the same name.

But another theory is that there used to be a kind of tapir that lived in China long, long ago, but is now extinct. We don’t really know what it looked like but perhaps the nightmare-devouring creature we have now might have been based on that animal.

When reading around, I was pleasantly surprised to find the baku even now hanging out in popular culture.

The Baku in Popular Culture

One I already new about was the pokemon Drowzee in English or Suleepu in Japanese. It’s special ability is to put people to sleep and eat their dreams. It tends to like good dreams though. See what I said about turning the myth backwards.

Another is author Neil Gaiman’s Sandman, The Dream Hunters (illustrated by Yoshitaka Amano). I’ve got the big hunkin’ The Absolute Sandman — which I had signed by Neil himself when he came to Tokyo so many years ago — but it didn’t have this story in it. Boo~.  It seems The Dream Hunters is in Absolute Sandman volume five. It’s a story about a monk, a fox spirit, a tanuki,  and a baku.

And I even saw that there was an episode of Supernatural that mentioned the baku. I’m sure the little guy is out there in other places as well. Let me know if you know any others.

So I’ll finish up with: remember next time you wake up from a bad dream, clutch your blanket tight and say three times, “Kono yume, baku ni agemasu!” / “この夢獏にあげます” or “I give this dream to the baku!” And then don’t be surprised if your window slides open and a freaky little creature lumbers in. Or if you’d prefer you could preemptively stop those nightmares and encourage good sleep, by keeping an image of the baku nearby: a talisman, a drawing under your pillow, or one stitched onto your pillowcase perhaps.

Thank you all for listening. And if you want to hear me read Lafcadio Hearn’s story “The Eater of Dreams” it’s this month’s Bedtime Story over on Patreon. For only $5 support you can hear that and like over thirty other folktales and stories. We’re a two-person show and your support really helps a lot.

As a matter of fact, the microphone I’ve been using for the past year decided to crap out on me about a month ago and Richpav and I were making due with old mics and his sound savvy. But because of my gracious patrons I was able to level up and get a Shure SM7B, which is dreamy.

Everyone take care, stay healthy, make sure you’re not calcium deficient, and I’ll talk to you again in two weeks. Bye Bye.

Diving In The Oceans Of Kepler by MusicLFiles
Link: https://filmmusic.io/song/7062-diving-in-the-oceans-of-kepler
License: http://creativecommons.org/licenses/by/4.0/ 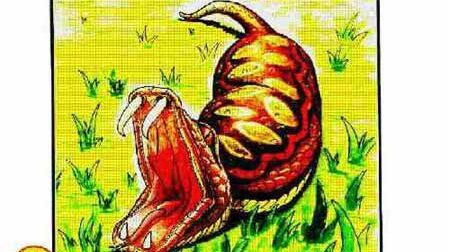 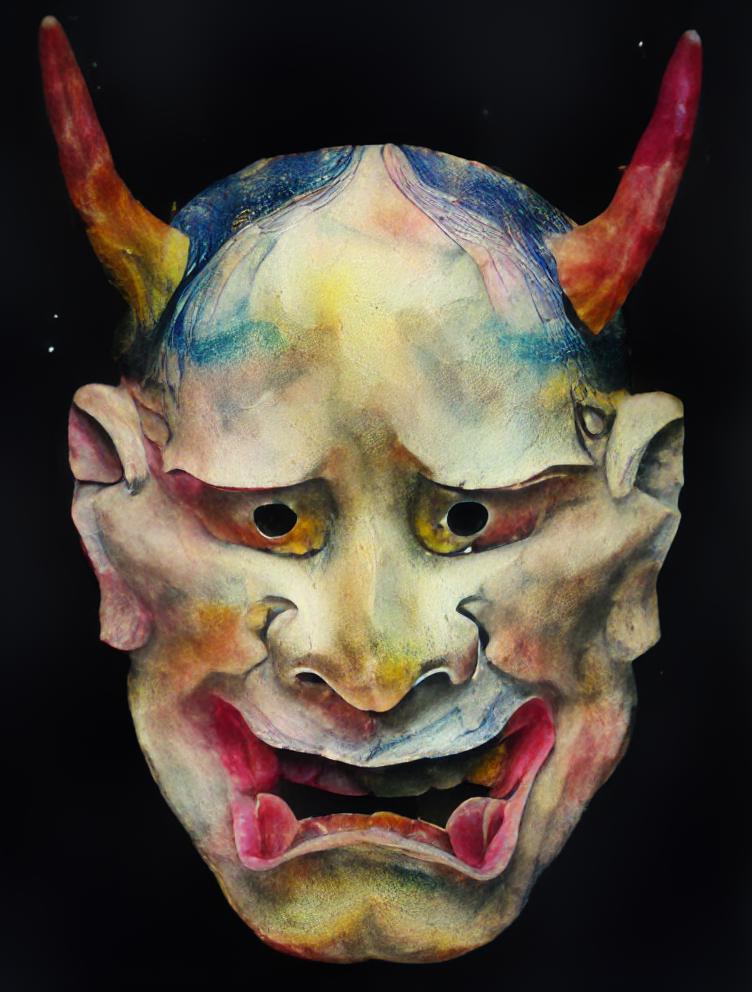 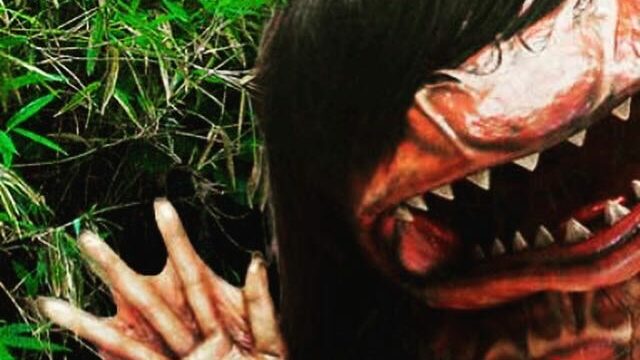 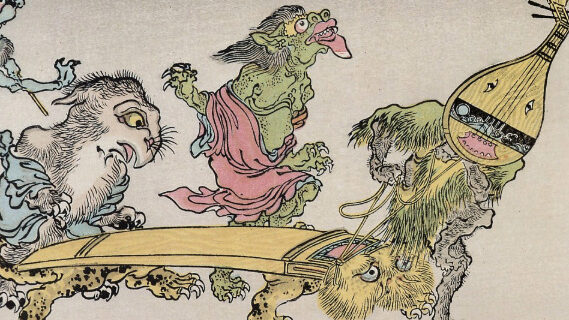