Koumare Ishi is one of the nanafushigi or seven mysterious occurrences from my area. The belief is that a rock is born from the side of the mountain, and when it falls the head abbot of the nearby temple, Daitoku, dies. It’s been going on for hundreds of years, and even today there is a perfectly round stone poking halfway from the mountain.

Below are some of the past koumare ishi. They are used as the gravestones for past head abbots at the temple. 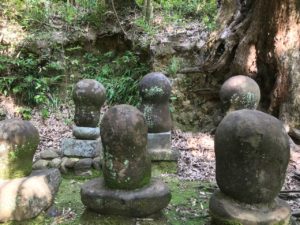 Below is a photo of the river today. You can see the next koumare ishi poking out from the side of the cliff. 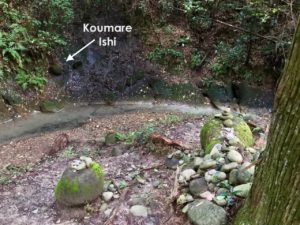 Nana fushigi （七不思議）. It could be translated as Seven Mysterious Things or Seven Strange Occurrences. Remember I introduced the Nanafushigi of Honjo back in episode 35? One of the seven was about a giant hairy foot stomping through a roof and demanding to be washed.

Then in episode 36 I talked about there were Seven Weird Happenings in my area, too, Enshu no Nanafushigi. And I introduced the Yonaki Ishi, the Rock That Cries at Night. If you haven’t listened to those, no worries, you can listen to this one first, then go back and check those two out. All the nanafushigi episodes are stand alone. So you won’t be lost.

Well, in today’s show we’re going to learn about the second weird happening in my prefecture, in a small town called Makinohara. Koumareishi （子生まれ石）.

I’m having trouble translating this. You kind of need to hear the story to understand what it means. For now just know that ko （子）means child. Umare （生まれ）means to be born. And ishi （石）is rock.

So stay tuned after the intro to hear this really freaky occurrence that’s been going on for hundreds of years.

Let me set the scene, the very moment that the mysterious koumareishi/child-birthing rock nanafushigi was (pun intended) born.

Roughly 200 years ago at the Daitoku Temple, the head abbot or oshou （和尚）, was on his deathbed surrounded by his followers and devoted townspeople. With his last words, he made a prediction:

It went something like this. “When I die, a stone will be born from the cliff that runs alongside the river behind the temple. After the stone falls, fetch it, and treat it as you would me. The oshou then passed away peacefully.

After his death, his followers trekked out behind the temple and scoured the banks of the river until, lo and behold, they found it. There sitting in the shallow river was a perfectly smooth roundish stone. And it was a big one, too, weighing 75 kilos or 165 pounds. So the monks tied back their sleeves and hauled it the 800 kilometers, about half a mile, back to the temple, where they decided to use it for a gravestone. And, of course, they treated it kindly and as respectfully as they would have their dear deceased oshou himself.

There’s more. From that day onward, every time the temple’s head abbott dies, one of these strange stones is born (air quotes) from the side of the mountain. It then falls into the river where it’s collected by the monks. To date there are 28 stones, all gathered the Daitoku Temple where they act as headstones for all the past head abbots.

Now a little about the shape of the rocks. Some places I read that they are perfectly round while in others it was written that they were eyebrow shaped, or gourd-shaped. Which are two different things entirely.

I wanted to make a trip to the temple and river anyway to get this cool binaural background sound for you and take some photos and videos for my patrons, but I also wanted to get to the bottom of exactly what shape these strange stones are. Are the perfect spheres? Or are they gourd-shaped.

So I did that and can tell you the short answer is both. The long answer is, all the rocks at the temple, the ones that are being used as gravestones are gourd or better peanut-shaped. While when you go to the actual river kind of littered around the area are these round stones. The one that is currently being born from the side of the mountain looks to be round, too. But that’s hard to judge, because of the angle. Because if you look at a gourd or peanut head on, it looks round.

Anyway, like I said, there are 28 rocks at the moment and they’re all slightly different in size and shape. I’ll put a photo up on the Uncanny Japan website if you want to see exactly what they look like.

But something interesting about their sizes. The belief is that if the oshou was strong and wise and well respected the mountain gave birth to a great big stone. If, on the other hand, the head monk was weak and not well like, the rock is smallish.

So these things don’t just pop out overnight. It takes awhile for them to appear and slowly make there way out of the mountain to plop into the water. When the people in town see the beginning of a rock being formed they know that the current oshou is approaching the end of his life. So I wonder how the abbot feels about that. Maybe he doesn’t want to go just yet.

Well, that exact thing happened. Many, many years ago, one of the abbots saw that a new rock was being born and thought to himself not so fast. He snuck over and pulled the stone from the earth, carried it to a faraway mountain, and threw it away. There problem solved. Not so fast. The next day when he went to look, the rock had returned to its original place. He died when the mountain decided it was time.

Let me share another story that quite disturbs me.

Many, many years ago, there was an oshou who suddenly fell ill. He was around fifty years old, much too young to die. However, he had a very serious disease and grew so sick that he could go any day. All the townspeople and all his followers came to sit around his bedside and pray and wish for his recovery. He was an extremely popular and well loved monk.

It was during one of these sessions that the youngest monk got the idea. Ha! If I run down to the riverside I can see if a rock is being born. That will let us know how close our beloved oshou is to dying.

So the young man hurried over and found that indeed there was a stone on the verge of falling from the mountain side. Oh, no! He raced back to the temple to tell what he found..

“Dear Osho!” He said. “I went down to the river to look and I found that there is a stone just about to be born.”

The very sick osho opened his eyes and smiled at the young monk. “Is that so? Well, how about I give it to you?”

“Eh?!” the young monk said and made a strange face.

After that, day by day, the oshou got better and better. Until he was strong, ruddy, and full of life again. However, at the same time, the young monk began to feel sick. He got progressively worse and it wasn’t long before he was bedridden himself. He got progressively worse until he was the one who was bedridden. In two month’s time, the oshou was reading the sutras for the young monk at his funeral. At that exact moment a rock he had seen with his own eyes earlier plummeted to the earth, splashing in the river. It was a small one though. Because the young monk was so young and unlearned, not yet wise, his rock, or his gravestone actually, reflected that.

So that is another of the my prefectures nanafushigi. I mentioned I made a trip to both the river and the temple. At the river I took photos of the newest stone making its way from the side of the mountain. Strolled around for a while. Then we made our way to the temple, saw the gravestones, and I remembered I needed to get an omamori, or amulet, for a friend, so I found the side building of the temple that sold them and while I was talking to the woman who sold them, this old monk, I don’t know, late 70s, early 80s, comes tottering down the hall. He’s really adorable, wearing a mask, has a neat cane. And he’s really excited to see me asking where I was from and that he really liked my camera. We talked for a bit while he was putting on his shoes to go somewhere.

It wasn’t until I got home that I put two and two together. That stone I saw at the river was his stone. And it was like more than halfway poking out. And oshou I met was such an incredibly kind and gregarious guy. I’m guessing the woman who sold me the amulet was his daughter or daughter-in-law, and as I was leaving her son came out, so I kind of met the oshou’s grandson, too. It’s just a rock and a legend, but I got a weird sad feeling inside when I made that realization. But like I said it’s only half way out now and it could have taken fifteen, twenty years to get that far. So,

Okay, that’s all for today, nanafushigi, seven mysterious occurrences or something like that. Please go back and listen to episodes 35 and 36 if you want to hear other nanafushigi and if you would like to see some photos of the river where the current stone is sticking out and the gravestones of past head monks they’re up on the Uncanny Japan site.

Thank you so much for hanging out with me today, everyone stay safe and I’ll talk to you again in two weeks.

Previous
« Bon Odori: Dancing with the Dead (Ep. 58)
Next
Kanreki: Your Auspicious Years, Yakudoushi: Your Calamitous Ones (Ep. 60) » 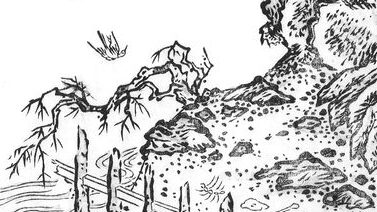 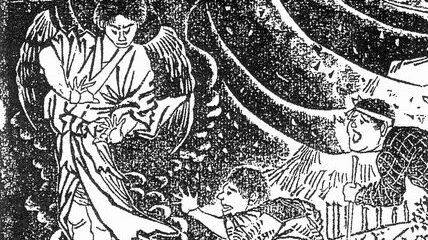 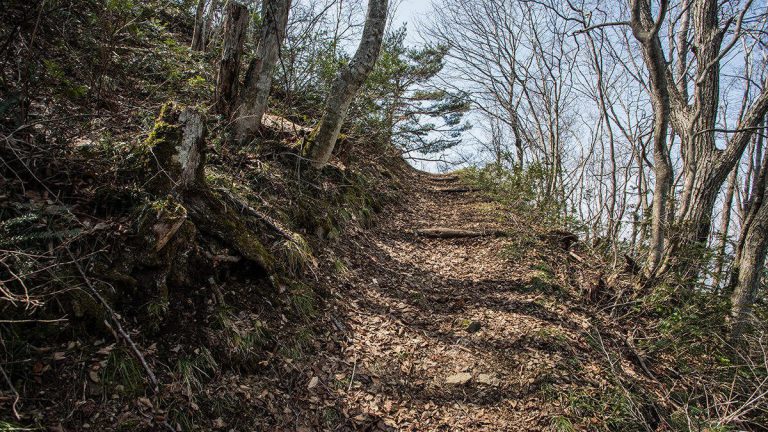 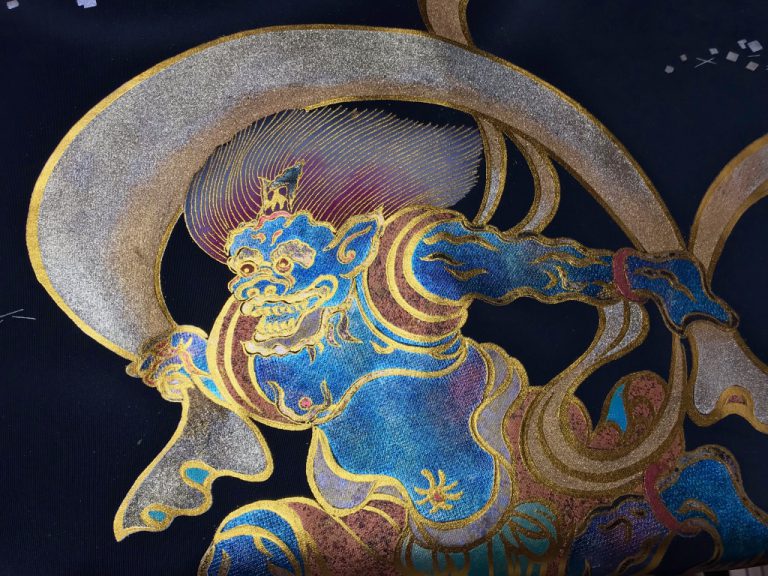 Fuujin and Raijin: The Gods of Thunder and Wind (Ep. 76)